The official national flag of Belgium is square, but the rectangle variant is more popular. 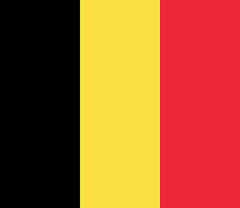 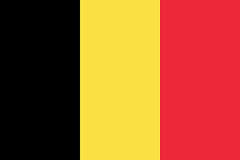 From an email that contained a PDF file about an event occurring at the Black Cloister Brewing Company on Thu, Jul 21, 2016.

JOIN US ON THURSDAY, JULY 21 FOR A NIGHT CELEBRATING BELGIAN NATIONAL DAY

Belgian National Day is the National Day of Belgium celebrated on July 21st each year and is one of ten public holidays in Belgium.

It commemorates an event on July 21, 1831 in which Leopold of Saxe-Cobourg swore allegiance to the new Belgian constitution, thus becoming the nation's first monarch under a constitutional monarchy and parliament. The king's vow marked the start of the independent state of Belgium

To celebrate Belgian National Day, Black Cloister will be pulling out all the kegs from our coller and put some very rare Belgian beers on tap all at once for one night only.

Deb and I visited the Black Cloister for a few hours, arriving at about 8:30 p.m. Thursdays are trivia night at the BCBC, and it was busy, as usual. We stood at the bar with friends Laura and Dan who are trivia fans. We expected to see them.

At the bar, we met someone who also attends the Pints and Purls nights at the BCBC. We discussed knitting, crochet, knit-and-sits, etc. "Bad Amy" yarns may open a storefront in Maumee. Fiber fans meet throughout the day on Mondays at the Plate 21 coffee shop in South Toledo.

My wife and I shared individual beers.

We started with the Dupont Vielle Provision Saison, which is a light Belgium-style beer. Good for the hot and humid weather like we are having now. (Along with water.)

Next, we tried a sample of the Rodenbach Alexander 2016, a Sour/Wild Ale, which I thought was fascinating. I would have preferred a slightly large glass of this beer, but Deb considered it to be too sour for her. I'm unsure what type of glass the BCBC used to serve this beer.

Our next full glass of beer that we tried was the De Dolle Arabier, a Belgian Strong Ale. This was okay, but it seemed to lack the flavor that I have tasted in other Belgian Strong Ales. It was like a saison with a higher alcohol content.

Our third glass of beer, and our fourth tasting, was our favorite of the night: St. Bernardus ABT 12, a Quadrupel. We both considered this a fantastic beer, and it could be one of my all-time favorites, along with the LeTrappe Dubbel and the Rochefort 10.

Our final shared beer was the Stuise Blue Monk, another Quadruple. This one had an odd flavor that neither of us liked. We didn't finish the beer.

We never tried any of the BCBC beers. My favorite BCBC beer since they opened has been the Marty, which is their Belgian Blonde Ale. I like their wit. I want to try their Belgian Strong Ale.

It was an enjoyable evening, trying to answer the trivia questions even though we weren't officially playing, talking fiber arts and crafts, and discussing beer. We always have a good time meeting new people at the bar.