Notes before, during, and after brew day

The Tue, Mar 25 Northern Brewer order arrived via UPS around 1:00 p.m. on Thu, Mar 27, a little under 48 hours after placing order. If that timeline holds, then the Wed, Mar 26 order may arrive late in the afternoon on Fri, Mar 28. I doubt Saturday delivery is used.

The second package of London Ale Yeast (Wyeast Labs #1028 mentioned below arrived around 5:30 p.m., on Fri, Mar 28 from Northern Brewer.

Rest of the ingredients purchased at Titgemeier's Beer and Wine Making Supplies :

On Wed, Mar 26, 2014, I purchased all of the remaining ingredients including the 6.5 gallon fermenting bucket and the airlock. The only exception: Titgemeier's only had one package of the yeast, so I purchased the other package from Northern Brewer. The tracking for yesterday's order showed the package should arrive on Thu, Mar 27. So hopefully, today's one-item order arrives on Friday or Saturday. If not, then I'll inquire about plan B for the rest of the yeast. The grains purchased at Titgemeir's were milled at the store and placed together in one sack. I ordered the Franco-Belges unmilled. Today's Titgemeier's shopping cost a little over $70.

Volume and Gravity in Boiler

Chill to around 75 degrees. While still in kettle, whirlpool stir then cover and let sit for 15 min. Our gravity was 1.080. Then pour into fermenting bucket, add yeast, and then agitate to create bubbles, then pound on lid. Add airlock. We ended just befor 6pm. - Mar 30, 2014

I believe ideal fermenting temp is 62 to 65 degrees, but I wanted to slow the fermentation the first couple days to ensure that our 6-plus gallons of beer does not ferment too much by over-bubbling into the airlock. - Mar 31, 2014

If necessary, we were advised to remove airlock cap and attach tube to airlock to allow excess gas and bubbles to pour into a bucket. of course, sanitizer used on everything. thus far, the bubbling appears normal. - Mar 31, 2014

http://www.homebrewtalk.com/f13/imperial-stout-fermentation-temp-130736 - "Fermentation temps are most important during the growth phase and the first 1/3 of active fermentation." - Mar 31, 2014

"Let it be at current temps for another week at least. The yeast might be finishing fermentation, but they still have some cleaning up to do. After another week or two, I would drop the temp as low as you can get it." - Mar 31, 2014

"If you can refrigerate it, that'd be great. I wouldn't bother using a secondary vessel, honestly. Just another opportunity for oxidation and infection. Age it in primary for a month, then bottle." - Mar 31, 2014

On Tue, afternoon, Apr 1, 2014, the airlock contained beer. The fermentation got extremely active. I moved the bucket to the cooler basement. I replaced airlock with clear, plastic tubing and submerged other end of tubing into a half-filled container of sanitizer. It gurgled mightily. - Apr 03, 2014

The pressure Tue afternoon, Apr 1 was so great that some air and the occasional bubble squeaked out the under side of the lid. I'm sure lid was on securely, otherwise the bucket would have probably leaked when it sloshed on the drive home on Sunday evening. - Apr 03, 2014

The pressure decreased Tuesday evening. The setup remained through Wednesday. On Thursday morning, April 3, I sanitized an airlock and replaced the tubing with the airlock and moved the bucket back into the warmer dining room. - Apr 03, 2014

During the siphoning phase when moving beer from primary to secondary fermentation vessels, we filled a small pitcher with 16 oz of beer for taste-testing with various amounts of coffee. DD liked the one 2nd least amount of coffee, which was 1/2 teaspoon of brewed coffee with 4 ounces of beer. - Apr 16, 2014

My favorite was no coffee added. I liked the beer as it was from the primary fermenter. I could taste hints of coffee in the beer as is, and that's probably due to the ingredient: Coffee, Franco Belges (175.0 SRM). - Apr 16, 2014

We're trying to do a Maumee Bay Brewing Company Total Eclipse Breakfast Stout clone. Chief brewer Clint gave us a tour at the end of March. That's how we learned about the Franco Belges. I'm unsure if Clint uses actual coffee in the recipe. - Apr 16, 2014

Bottling day occurred on Sat, May 3, one day shy of five weeks after brewing. JP came to our house to help us bottle. I made pizza with spelt flour added to crust. We sampled multiple beers from The Andersons. DD bottled the beer. JP started capping, and then I capped. - May 04, 2014

We then bottled the one-gallon batch, Irish Red Ale, from Northern Brewer, two days shy of two weeks from brewing day. We figured two extra days would not matter, and we had the equipment and sanitizer bucket setup. - May 04, 2014

The stout produced 51 bottles. The Irish ale produced 7 bottles. For carbonating the stout, we used 3 ounces of corn sugar with two cups of water, boiled, to sterilize the sugar. The mixture was added to the bucket housing the stout after DD transferred stout from carboy to bucket. - May 04, 2014

The dissolved sugar was mixed in bucket with stout. Then beer was poured into bottles and capped. - May 04, 2014

For the Irish ale, we used the tablets that came with the kit for carbonation. One tablet dropped into each bottle prior to filling bottle with beer. - May 04, 2014

calculators exist at Brewer's Friend for determining the amount of sugar to add for carbonation and the alcohol by volume based upon FG. - May 04, 2014

Here's a glass of our 'Dark-eyed Junco' Imperial Breakfast Stout, along with the first bottle that we capped, which we will save for later and some poetry about the junco from the book The Cuckoo's Haiku, written by Michael J. Rosen and Illustrated by Stan Fellows. 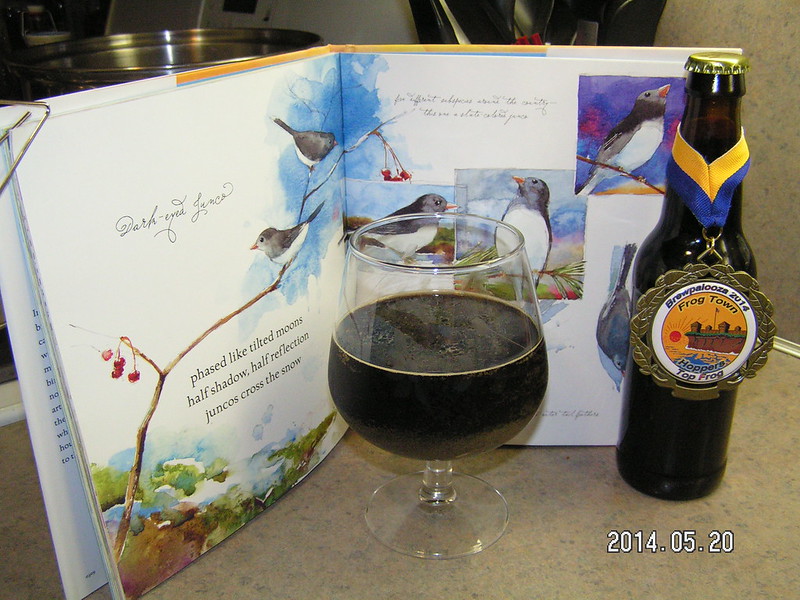 As of late July 2014, we only have eight or so bottles left. We'll definitely brew this beer again.

I think the last time that we consumed a bottle of our stout was back in August or September. We drank another bottle on Sat evening, Dec 20, 2014, and the beer still tastes great.

I think Deb and I described it simply as "Wow!" I wish we had more because I would drink one about everyday.

Earlier in the day, I drank a bottle of MBBC's Total Eclipse Breakfast Stout, and then I drank our stout in the evening. I think ours is pretty close to being as good as the MBBC's stout, which is one of my favorite beers.

This stout is probably the best beer that we have brewed thus far, but that's probably because I like stouts a lot.

I think about all I need is a stout, a saison, and a dubbel, and I would be set. And this Dark-eyed Junco Imperial Stout satisfies one category. We need to brew this beer again in early 2015.