We like visiting Mutz, which is located at the Oliver House in downtown Toledo, near the High Level bridge. It's a small bar that is situated below ground on one side of the building. Attached is a shared courtyard. Beer is available from the Maumee Bay Brewing Company located in the same building with its main brewing operation located across the street. Food can be ordered from the upstairs restaurant. We like the duck wings. The bar offers free self-serve popcorn. Live music offered on the weekends. The bar has a neighborhood feel, especially on Friday evenings. Below is an account of one visit.

At around 7:40 p.m. on Tue, Jul 15, 2014, Deb and I arrived at The Oliver House. We dined at Mutz and sat outside in the small, shared courtyard area surrounded by a four-story brick building on all sides. Irregular-shaped courtyard. Tight, cozy area. Nice. We sat next to a window for the Petit Fours Patisserie.

It was a fall-like evening. It felt like a high school football Friday night in September. Toledo temps at about 8:00 p.m. were in the upper 60s. It was breezy at times, even down in the courtyard. Partly cloudy sky. Amazingly comfy for mid-July.

We drank the Red Saison, released earlier in the evening. It had a very dark red color. Deb said it seemed a bit hoppy compared to other saisons. I like saisons, but they seem to lack the funky Belgian yeast flavor that's found in other Belgian style beers.

This Belgian-style saison has traditional French Pilsner, Vienna, and Wheat malts along with a small addition of Dark Wheat for its unique color. The malt plays well with the multiple additions of Styrian Auroro hops and a late hop of Amarillo. The complex yeast profile leans toward being fruity and slightly spicey, ending in a dry finish. This is a warm-weather treat without missing any flavor or complexity. 40IBUs, 7.0%ABV.

I ordered the Betty's Salad, an old Toledo tradition, and hand-cut fries. Deb ordered the turkey burger with a side of asparagus.

I don't know who else in the area offers the Betty Salad.

From the above link:

Betty's Salad is a regional, Midwest salad created by Betty Timko and featured as a menu item at her restaurant, Timko's Soup and Such, in Toledo, Ohio. The restaurant was located in a brick building at the northwest corner of Sylvania and Douglas Roads of the Devaux Village strip mall in West Toledo. After Betty died, the restaurant closed, and her signature salad dressing is still produced and distributed at regional grocery stores.

I remember when Timko's existed at Douglas and Sylvania. Since around 2002, the El Camino Real Mexican restaurant has occupied that building.

My Mutz Betty's Salad contained spinach, hard-boiled eggs, bean sprouts, and bacon. Simple but different from a typical salad that we make at home. Even though I only use olive oil and balsamic vinegar on salads at home, I like the Betty's Salad Dressing a lot.

The Grumpy's Garbage Salad and the Betty's Salad are two Toledo traditions.

Anyway, after our Mutz meal, Deb and I split a King Prunus Apricot Wheat. Both beers were tasty. Deb liked the King Prunus better. The wheat beer had a burnt yellow-orange color.

American wheat matched with apricot puree from Napa Valley come together to create an antioxidant rich beer that is as good for you as it is for your senses. A.B.V. 4.6% - I.B.U. 31

I needed to dress warmer. I wore jeans because of the cool weather. I should have worn a long-sleeved shirt. It was chilly, sitting outside at 9:17 pm with the occasional breeze, especially after drinking beer and a glass of water. We left Mutz around 9:45 p.m.

For the July 3 outdoor party that we attended in Maumee, it was a cool evening, so I wore a t-shirt with a flannel shirt, but this evening, July 15, was cooler.

This summer's cool weather reminds me of the summer of 1992 in the Toledo area where I wore long sleeves on many evenings outside. 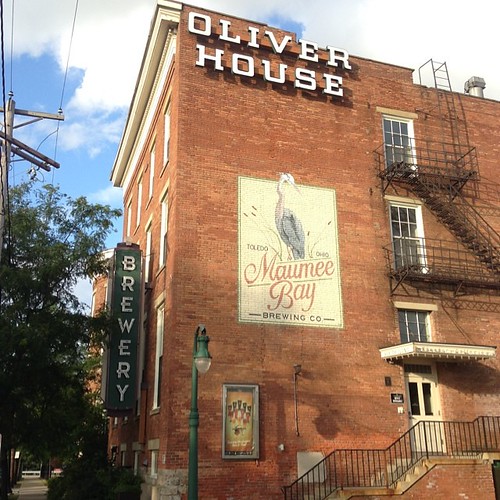 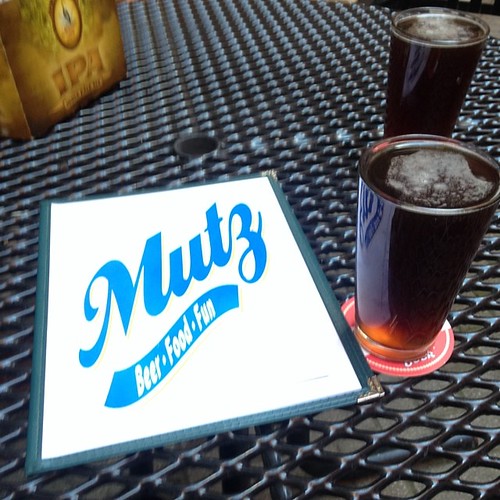 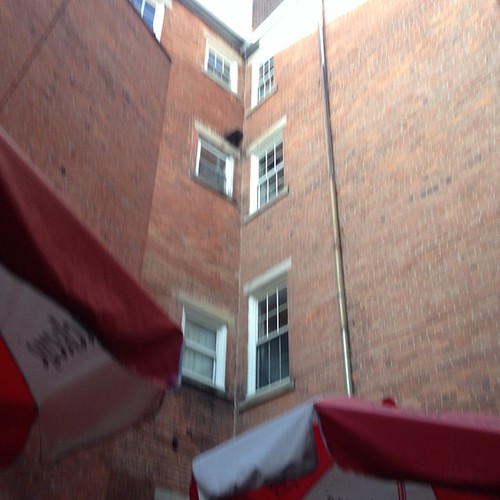 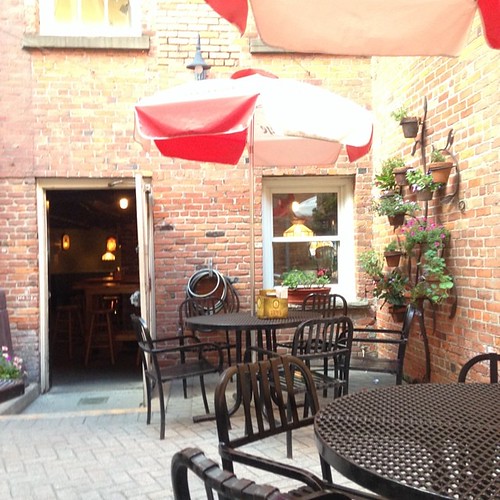 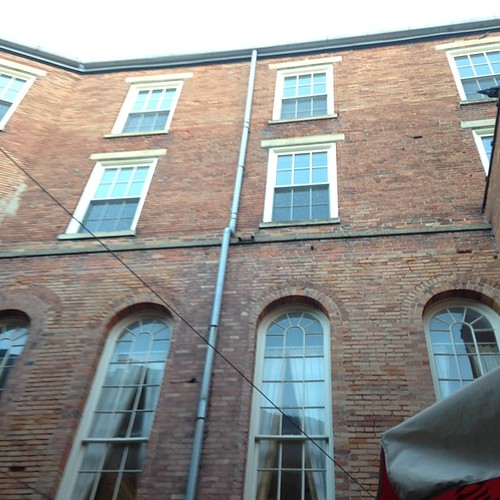 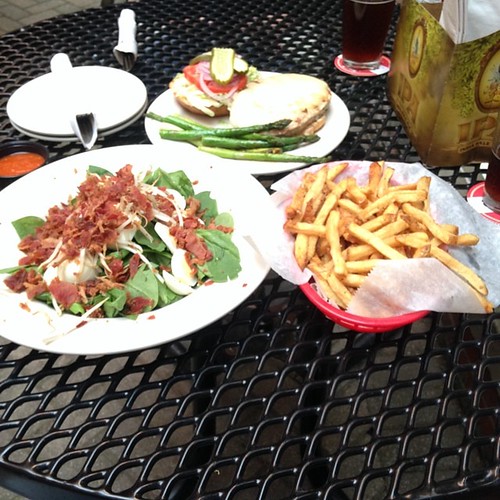 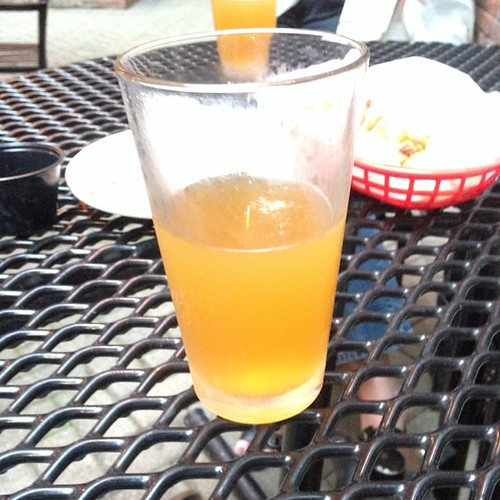 From a different visit at Mutz. Cozy. 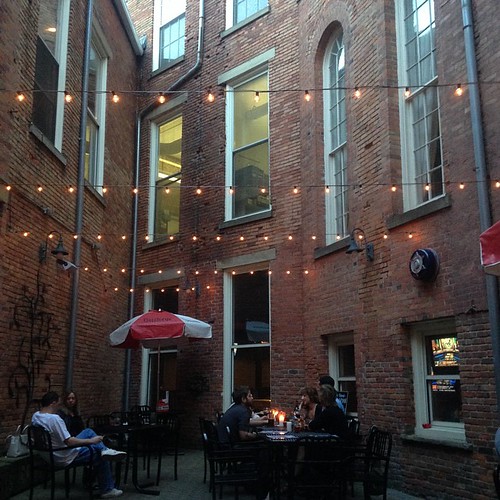 Some photos that I took while visiting Mutz during a brisk snowfall on Tue, Feb 17, 2015.

The main brewery operation, located across the street. 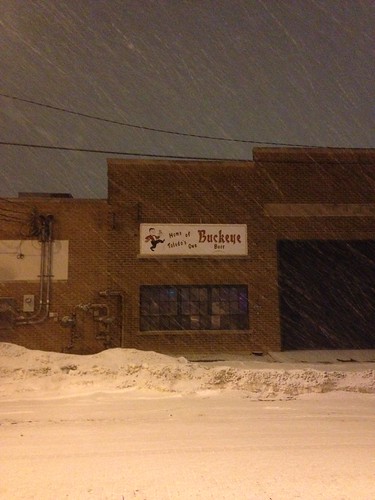 February 2015 wound up being the snowiest February on record for Toledo. 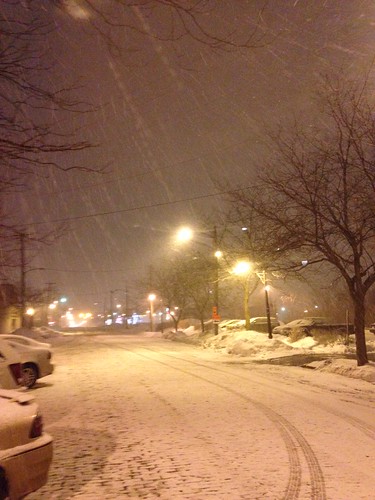 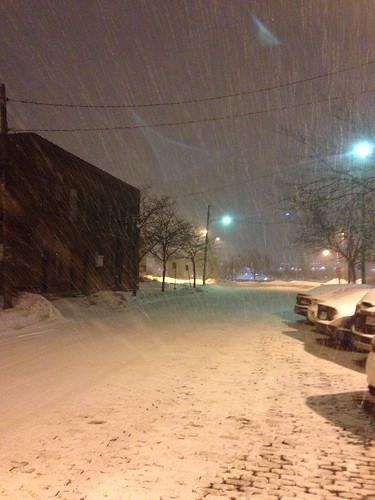 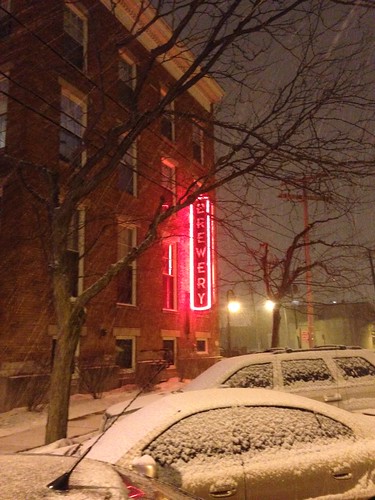