One Gallon Batch. All-grain. Belgian Dubbel. Recipe is called "Bacon Dubbel" from the new Brooklyn Brew Shop book titled Make Some Beer. One major exception to the recipe: we did not use bacon.

At about 3:30 pm, we started the process to brew a one-gallon batch of Belgian Dubbel.

At 3:35 pm, we turned off the stove burner, added the grains, and started the mash. I forgot to take a photo of the mash process.

Basically, the grains steeped in the water. The water barely covered the grains. Water temp was maintained between 144 to 152 degrees.

Every 10 minutes, we stirred the grains and checked the temperature. If the temperature dropped to the low end of the range, I turned on the burner to medium heat for under a minute.

The mash occurred in our aluminum pasta pot. When the mash completed, we poured the water and grain mix into a large mesh strainer, placed over a large pyrex bowl. After this point, the grains remained in the mesh strainer.

The mash lasted 60 minutes. During the final 20 minutes, I warmed a second pot that contained one gallon of water to 170 degrees for sparging.

When the 60-minute mark for the mash was reached, I turned on the stove burner and warmed the mash to 170 degrees.

Once the mash temp reached 170, then sparging began.

We sparged for 15 to 20 minutes. The very large mesh strainer fits across our pots. 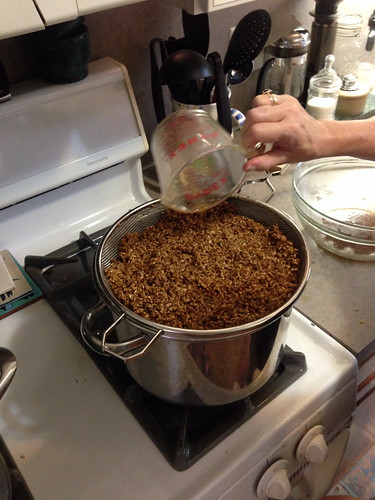 The wort had a dark brown color with a hint of red, which is typical of dubbels. Trippels have yellow colors.

After sparging was completed, I poured the wort from the non-stick pot into our aluminum pasta pot. I don't like using non-stick pots and pans.

The 60-minute boil started at 5:14 pm. We used a light, rolling boil with the burner set at the middle setting. 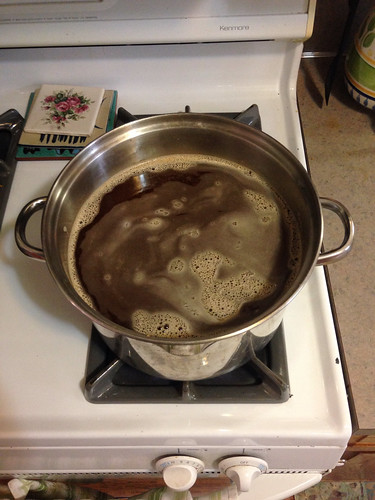 We added half of the hops at the start of the boil. We added a quarter of the hops with 30 minutes left in the boil.

At the 55-minute mark or 5 minutes left in the boil, the final quarter of the hops and the Belgian Candi were added. At this point, we also started an ice bath in our kitchen sink.

While brewing the dubbel, we drank the excellent Belgian Trippel that we brewed last month, and we ate the [Proof 419](http://proof419.com/ bread that we purchased in the morning at the Toledo farmers market. That bread uses beer from the Maumee Bay Brewing Company.

From our one-gallon batch of Belgian Trippel. 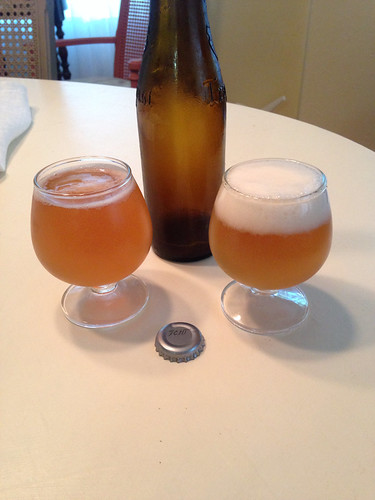 Two kinds of Proof 419 bread: One used sharp cheddar cheese and cayenne pepper, and the other used Parmesan cheese and black pepper. Both breads also used beer from the MBBC. 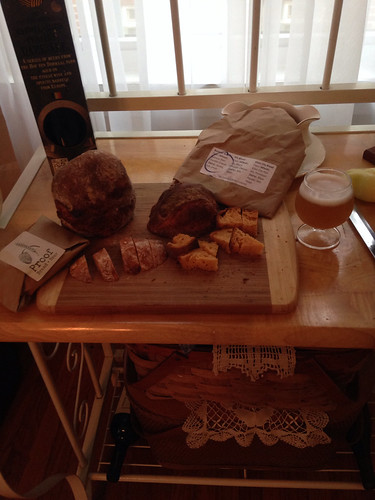 The wort-chilling process began at 6:15 pm, and it completed at 6:44 pm when the wort temp reached 72 degrees. Close enough. The book said to chill to 70 degrees.

To chill the wort, we placed the pot of wort into an ice bath. 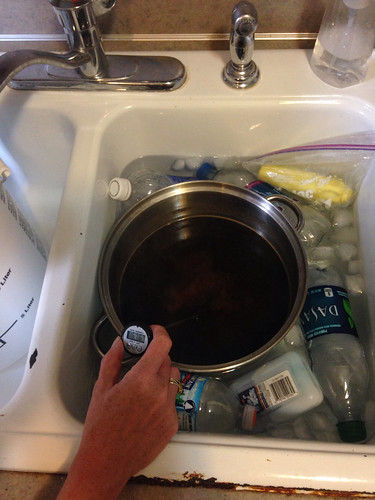 Once cooled, we placed a large funnel that contained a mesh screen onto the carboy. We poured the wort through the funnel and into the carboy. Next, we added approximately a half-pack of yeast, shook the carboy to distribute the yeast, and added the cap. 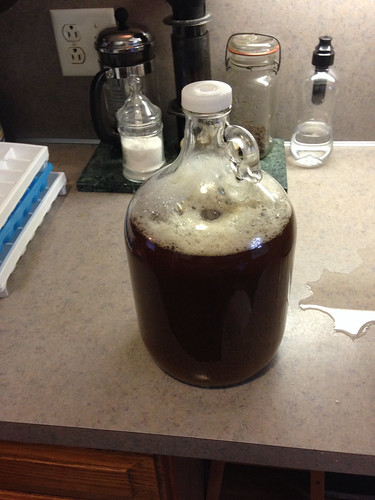 I moved the carboy into the dining room. I added the blow-off tubing at 6:58 pm. 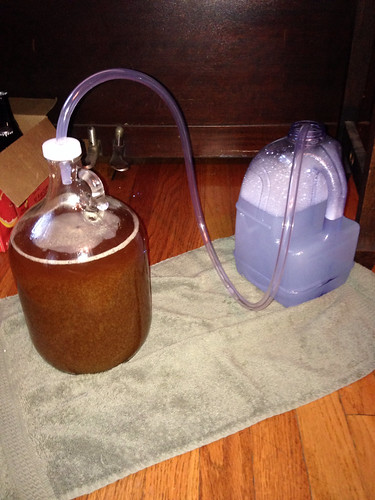 It's a 3.5 hour process to brew a one-gallon batch of beer when using the all-grain method.

This Safale yeast certainly acted differently compared to the Wyeast products that we are accustomed to for brewing Belgian beers.

Peaked fermentation activity occurred during the overnight of July 19 and 20. I never saw the fermentation at its most active point.

By the end of the day on July 20, peak fermentation was complete. It was a very fast process.

Typically if we brew a one-gallon batch in the evening that uses Wyeast, it takes 12 to 16 hours for significant fermentation to begin, and it remains quite active for 12 to 24 hours after that.

I left the carboy upstairs through the warmer days of July 21 and 22. I moved it to the basement late in the 90-plus-degree day of July 22. We don't have air conditioning.

For much of the fermentation process, we experienced cooler than normal weather for late July and early August with high temps mainly in the 70s to low 80s and low temps in the 60s with many mornings in the 50s.

On Mon, Aug 11, 2014, we bottled the beer, which produced eight bottles. We got stalled on bottling and left more beer than planned in the carboy. It was hard to get the siphon working again and avoid the trub, so we called it a bit short.

We used maple syrup from northwest Ohio as the priming sugar.

During bottling, the beer smelled wonderful. We drank a small amount of leftover beer, and it tasted good. We noticed the raisin-like flavor that we typically experience with dubbels. We're excited about this one. 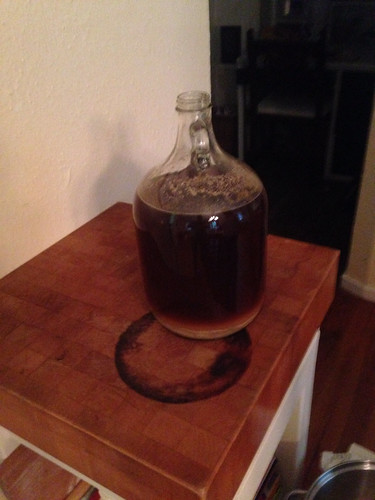 We drank our first bottle on Thu, Aug 21, 2014, and it tasted good, but it did not contain the raisin/plum flavors that we taste in the La Trappe Dubbel and in the Rochefort 6.

Maybe more flavor will develop if we wait a couple more weeks before trying another.

The dubbel is probably my number one beer style, not just among the Belgian beers but for all beers.

Dubbels typically have an ABV between 6.0 and 7.0 percent, so medium strength. But dubbels are not as light tasting as a saison that has a 6.0 percent ABV. The dubbels have more fruity flavors because of the grains.

We'll have to tinker with this recipe and study other dubbel formulations.

I drank another bottle on Aug 30, and it's still quite lame. It does not contain much flavor. I'm glad that it was only a one-gallon batch. I'll try a bottle each week, but this recipe is a bust.

Maybe this recipe was intentionally lacking in typical dubbel flavors because it was suppose to contain bacon, which we left out.

We'll definitely have to find another dubbel recipe.

I wound up enjoying this beer. I wish we had more. It certainly lacks the bold raisin or plum flavors of some our favorite dubbels, but that might be achievable by adding more Special B Malt to the recipe. This was a smooth, easy-to-drink beer. Not lame. Not a bust. I'd like to tweak this recipe with a two-gallon batch.