Five-gallon. All-grain. Saison. SMASH (single malt and single hop). The recipe came from the July-August 2014 issue of Brew Your Own magazine. This was our first five-gallon batch that we brewed on our own. It went a little rugged. It was an adventure. It took over five hours to complete.

Excerpts from the article:

Scribbled notes from my notebook:

huge fireworks exploded around neighborhood during the late afternoon and evening hours. of course, we brewed outside. so the experience was miserable with the annoyingly loud noise.

after brewing, I took Barney for a two-hour drive to calm him and me down. We drove south of Findlay, turned round at the Ada / Ohio Northern University exit, stopped for a burger at McDonald's north of Findlay, and then came home.

It fermented for nearly three weeks. For most of that time, I left the pale in our dining room. Air temps were mainly in the 70s to the low 80s during the daytime. Comfortably cool on most nights.

Air temps toward the end of fermentation reached into the mid 80s. Since we don't have air conditioning, the dinging room got warm too.

On Jul 22, 2014, the forecast called for high temps in the low 90s, so I moved the pale to the basement where it remained for a couple days until we bottled.

No bubbling activity occurred through the blow-off tube during the first few days of fermenting. Maybe that was due to the lower alcohol level and/or the type of yeast used. We thought that maybe no yeast activity had occurred.

After two weeks, we checked the beer. We planned to add more yeast, but we saw fermentation evidence on the sides of the pale. We tasted the beer, and it seemed fine, so we chose not to add more yeast. We returned the lid, and bottled it a few days later.

We filled only 43 bottles. We must not have added enough water or something during some part of brew day. We're a gallon off.

We tasted a small amount of leftover beer, and we liked it.

For the priming or bottling sugar, we used orange blossom honey that we bought at the Fresh Market.

In a small pot on the stovetop, I warmed one cup of honey with approx a half cup of water.

We added the honey to an empty, sanitized bucket.

We siphoned the beer from the fermenter to the bucket with the honey.

After the move, I stirred the mixture slowly for a bit.

Then we bottled and capped.

Our first attempt at brewing a five-gallon batch, and we finally get to use our new equipment.

We're surrounded by numerous big oak trees, so it's tough to find an open-sky spot on our back driveway. In the late summer and fall, many acorns rain down. For future home brewing outside, I'll try placing a screen-window type of setup over the kettle during the boil to ensure that it remains acorn-free.

We bought an assembled mash tun from the Adventures in Homebrewing, located in Ann Arbor. I'm not handy enough to make one like other homebrewers. 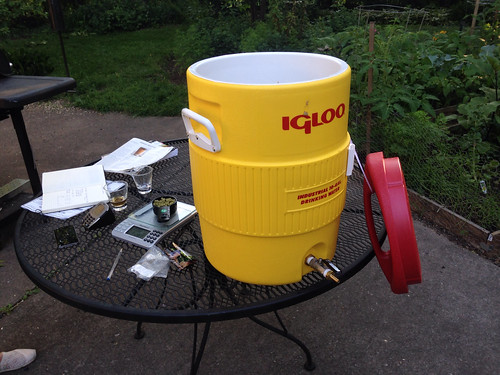 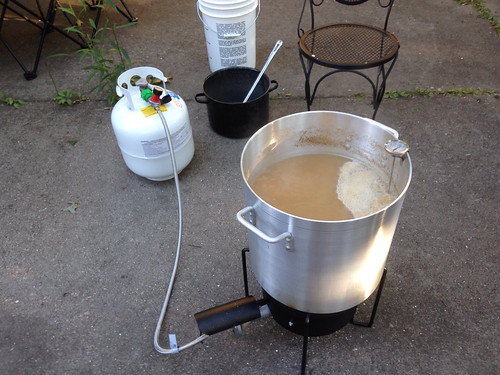 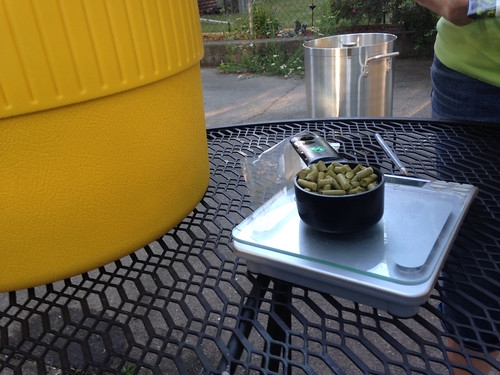 Our dog Barney supervised the brewing operation, wearing his Thundershirt, which failed to calm him from the powerful explosives that were detonated in our neighborhood all afternoon and evening. I guess they were called "fireworks." 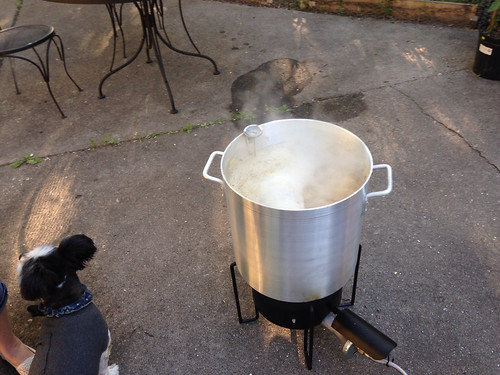 We also bought our wort chiller from Adventures in Homebrewing. 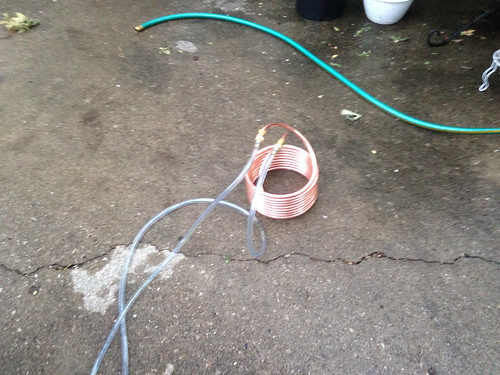 Wort chilled and ready to be dumped into fermenter bucket. 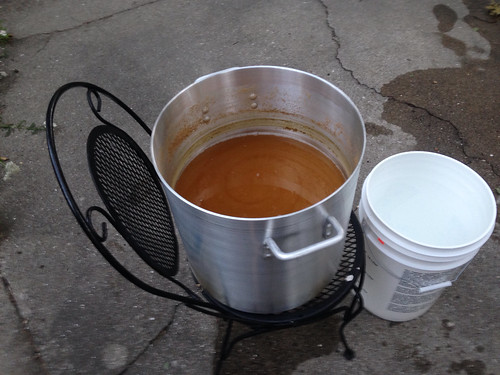 Deb washed and sanitized the bottles. 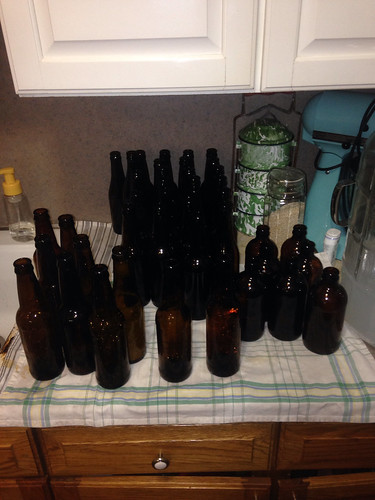 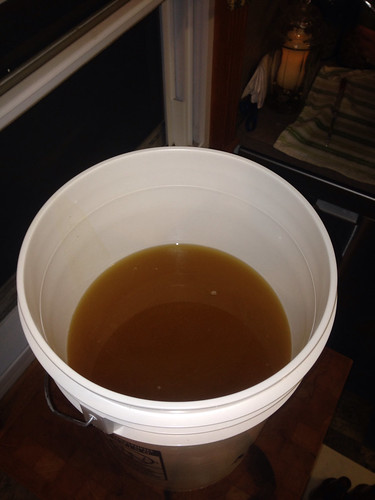 Ready to siphon beer from the fermenter and into the bottles. Deb filled, and I capped. 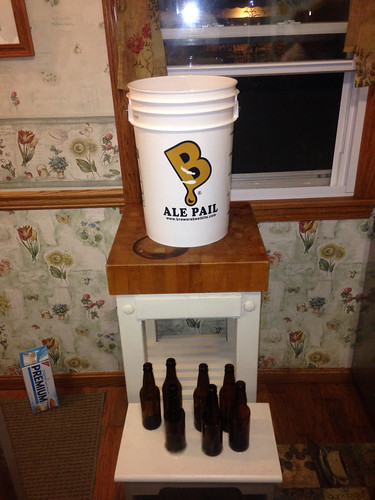 Deb broke out the bright yellow caps for the saison. 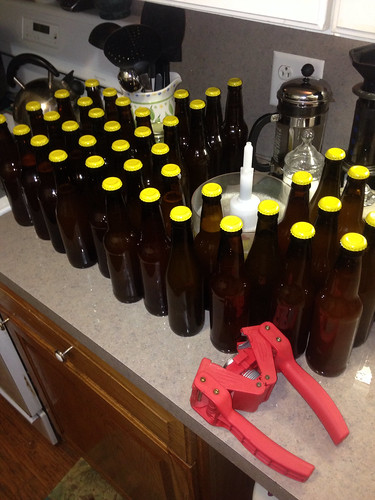 We drank some leftover beer. We liked it. It was better than I expected. 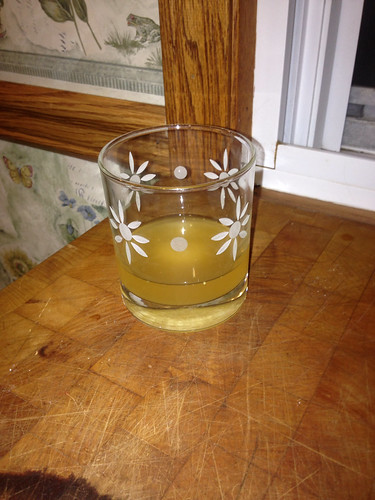 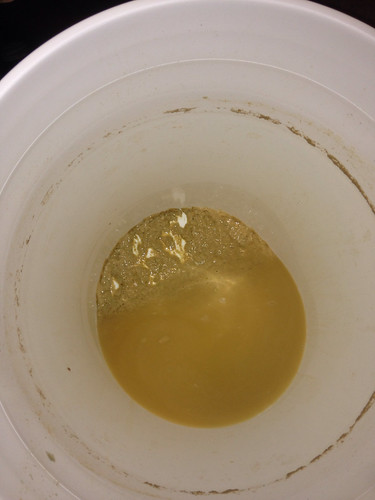 During the evening's bottling, we drank the Tricolored Heron Trippel that we brewed the previous month. Thus far, the Dark-eyed Junco Stout and this trippel are probably our favorite beers that we have brewed. 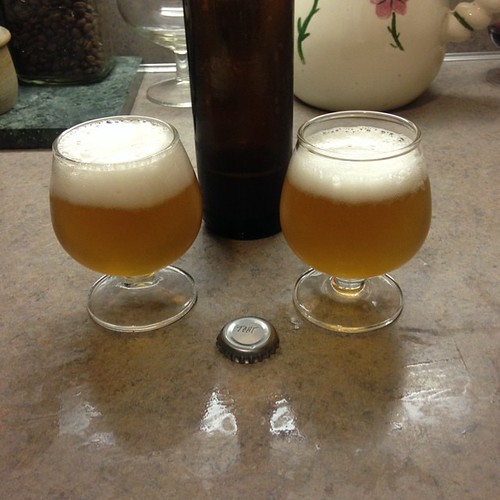 On Tue, Jul 29, Deb opened up a bottle. A bit early. I think the bottle was at room temp too. Just curious, I think, to see what it was like. It was overly carbonated. It volcanoed out the top shortly after opening. It tasted wrong too. Too sour or something. It was disconcerting.

On Sun, Aug 3, Deb opened up a chilled bottle, and this one tasted good. It smelled good too. We were relieved. But it was still overly carbonated. Have to pour immediately. Since we only produced 43 bottles, we were under with our wort on brewing day, and we probably used too much honey on bottling day. But at least it tastes fine. 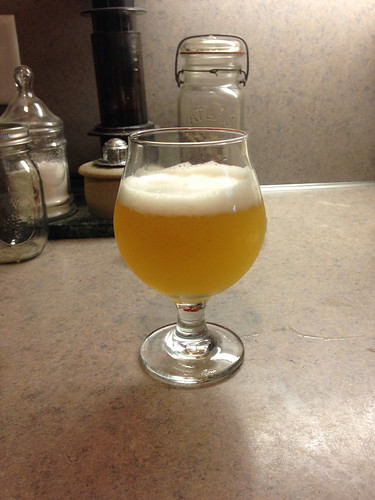 Sep 1, 2014 update: I like this saison beer. It's light and crisp. The main problem is the over-carbonation because we used one cup of honey for what amounted to a little over four gallons of beer. We need to cut back on the honey at bottling to around 3/4 of a cup.

Late October 2014 update: I drank a couple bottles, during the final week of October, and this beer seems to taste better now if that's possible.