Our basement temp is now in the upper 50s. This bottle sat on the basement floor, so we did not refrigerate it first before opening. 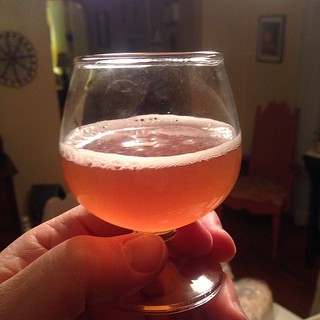 Back in the summer, we liked this one-gallon trippel a lot, which is why we brewed the five gallon version in August. But on Dec 13, 2014, we dumped the five-gallon trippel down the drain because it still tasted bad. We gave it some time, but it was not improving.

This evening's one-gallon batch bottle was a pleasant and surprise find now in December. The beer aged well because it tasted great. We both liked it better than the La Trappe Isid'or that we bought today, although they are different styles.