On Jul 5, 2014, I made a pizza dough that used some spent grains from our Dark-eyed Junco Imperial Stout that we brewed on the Mar 30, 2014 brew day at Jerry P's. It was probably the ugliest pizza crust ever made, but the taste and texture turned out surprisingly well. This might have been the best pizza that I've created.

The addition of the spent grains imparted a mild, earthy flavor, and the spent grains created a thicker and chewier crust. The grains colored the crust a dark grey, which was somewhat expected, based upon the stout beer, made from the grains.

Back on brew day, I placed some of the spent grains in two, thick, air-tight, plastic containers, and I placed the containers in the freezer.

A few weeks later, I pulled one of the containers from the freezer and dried the grains, which took about three days, much longer than I expected. I tried placing the grains in a warm oven, but that made them wet and hot. I mostly air-dried the grains.

After the grains finally dried, I placed them into an air-tight container and set the container in the refrigerator.

On July 5, I finally decided to try using the grains in a pizza recipe.

First, I ground some grains in our Vitamix. I pulverized the grains into a powder, but I used the Vitamix for under 30 seconds. In the future, I should trying grinding for nearly a minute, since this time, I found some twiggy-like aspects in the pulverized grains. So for this recipe, the spent grains were not quite as powdery as I preferred, but the process was close enough for testing.

After grinding the spent grains, the powdery mixture was colored a dark brown.

After mixing all the dry ingredients, the mixture had the color of buckwheat flour. It was colored a medium grey.

After adding water, the mixture became a dark grey color.

Initial thoughts while assembling the dough that proved to be false, except for the part about the dough being stiff when stretching into a pizza round:

I could have used more water, prob 500 g. The initial mixture produced a stiff dough. This may not ferment nor proof very puffy, and it may be difficult to stretch.

Little to no gluten would exist in these beer grains. Maybe next time, try only 55 g of spent grains. Start small and work up. Oh well. We'll see.

I autolysed for 25 minutes. Afterward, the dough felt great, so I see no need to add more water to the recipe.

I kneaded the dough for a little over 4 minutes. The dough got stickier near the end.

I set the dough up at 2:45 p.m. to ferment. The air temp / house temp was in the mid to upper 70s. The plan was to ferment for 2 to 3 hours. In this recipe, I used a slightly lower amount of instant yeast than normal.

The dough fermented for 3 hours, and it did well. It rose up to about an inch or so from the top of the bowl edge.

I divided and shaped the dough into 4 rounds, and then I placed the dough up to proof at 6:00 pm.

The dough proofed well. It moved more vertically than my typical pizza dough recipes, which spread out vertically and horizontally. This spent-grains-enhanced dough had good shape. Bizarre color though. Fun.

The first dough blob that I used to make a pizza had proofed for 2 hours.

The dough was soft and airy after proofing, but it was stiff to stretch and form into a crust. I had to be patient. The stretching and shaping went slow.

It was Neapolitan-style, I guess. I used Scarpetti marinara sauce, Turkey Foot Creek chevre goat cheese, olive oil, coarse Hawaiian red sea salt, and after baking, I topped the pizza with fresh basil that I picked from a potted plant in our backyard.

We were out of my wife's canned pasta/pizza sauce, that she made last fall, so that's why I used the commercial option, called Scarpetti.

I also made a salad that was compromised of greens from our garden. I topped the salad with Nasturtium from our backyard.

We didn't have any of our stout chilling, so we drank a couple Trappist beers.

Prior to baking, the oven was warmed for at least 40 minutes at 500 degrees with the pizza stone placed at the third level from the top, so approximately in the middle of the oven. I assumed that it would be a chewy crust, so I baked it higher from the bottom, so that the crust would not bake too much and get too hard. That was my theory, anyway.

Image version of the process with some repeated text.

During pizza assembly, I drank a Trappist beer. 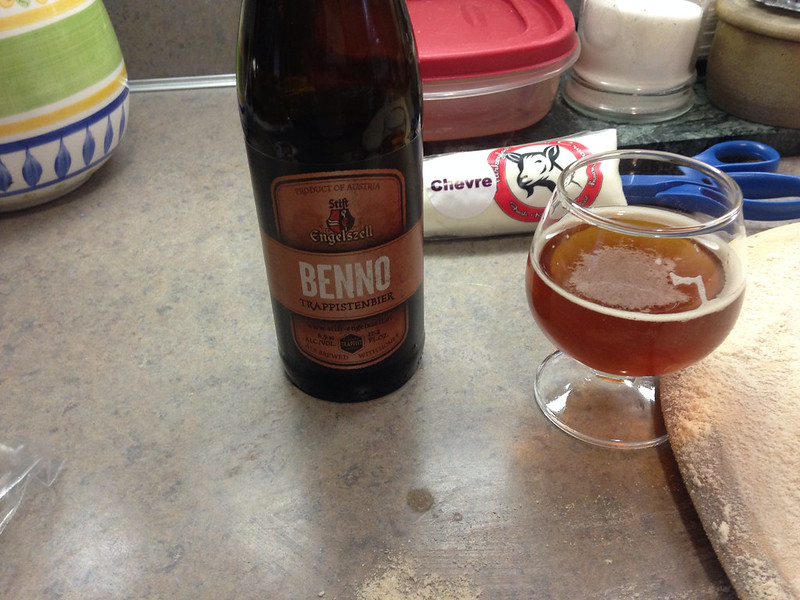 Dried spent grains as they exist on the left and after some were pulverized in the Vitamix on the right. 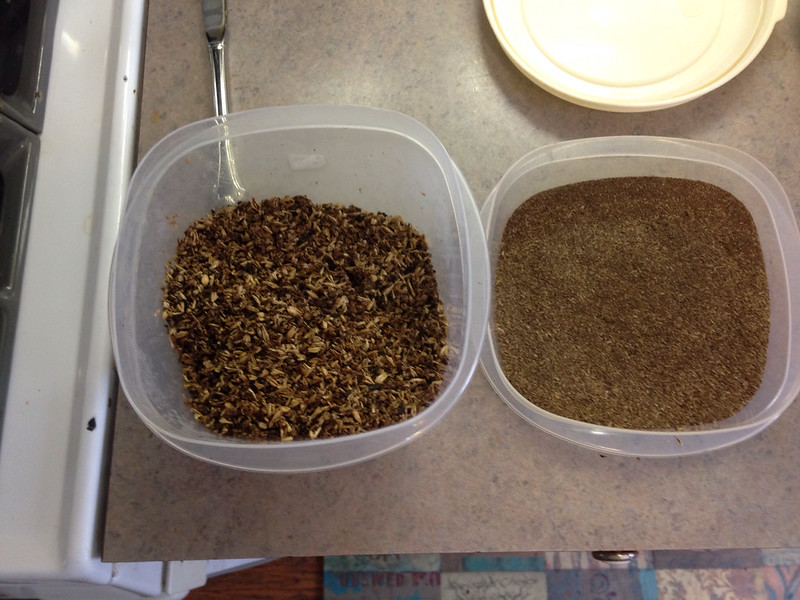 After dried ingredients were mixed, the overall color of the flour looked like buckwheat flour. Then I began adding water. 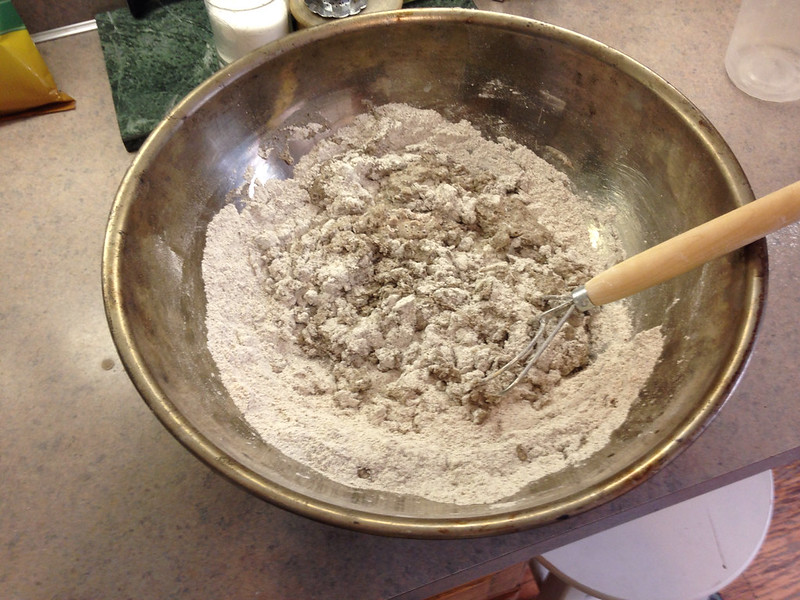 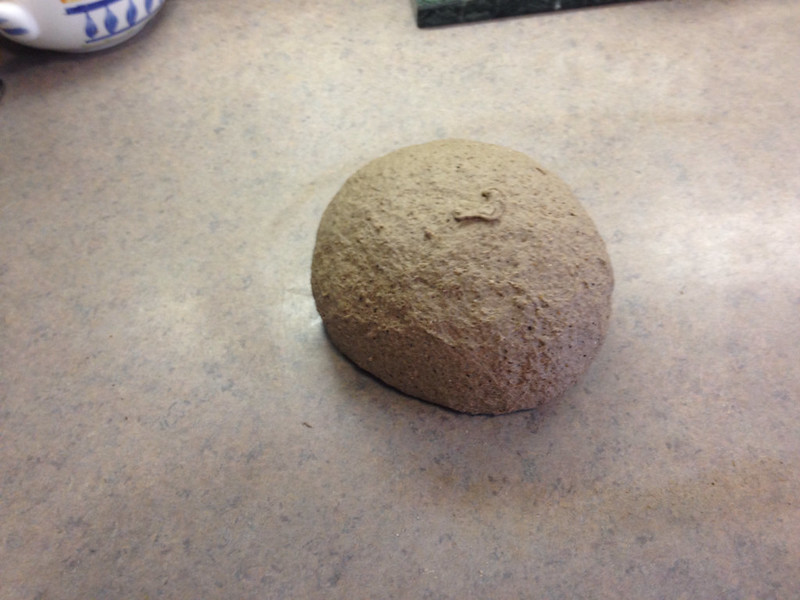 The kneaded dough was placed into a lightly oiled (olive oil) bowl and covered with plastic. 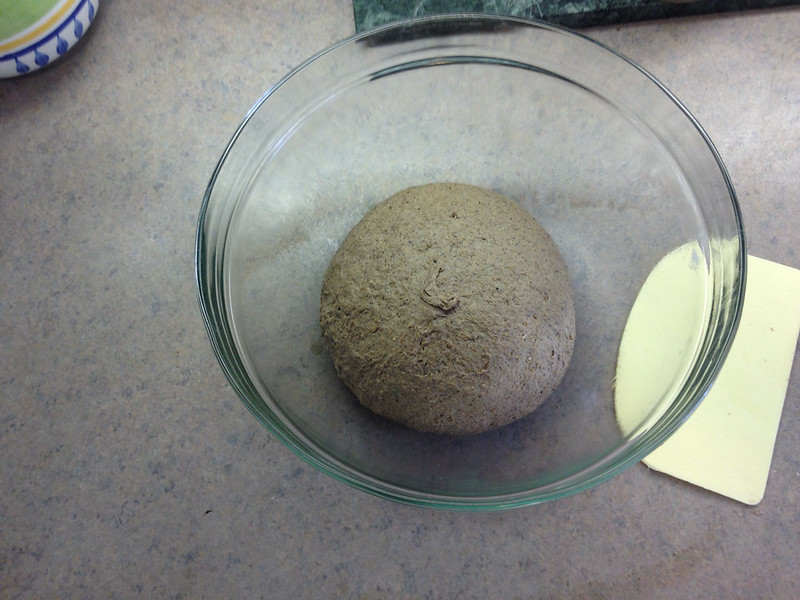 After three hours of fermentation, the dough puffed up a fair amount, although not as much as with my other pizza recipes. The spent grains would have little to no gluten properties, and since it made a stiff dough, it's possible that the spent grains inhibited dough growth or structure. But this dough fermented larger than I expected. 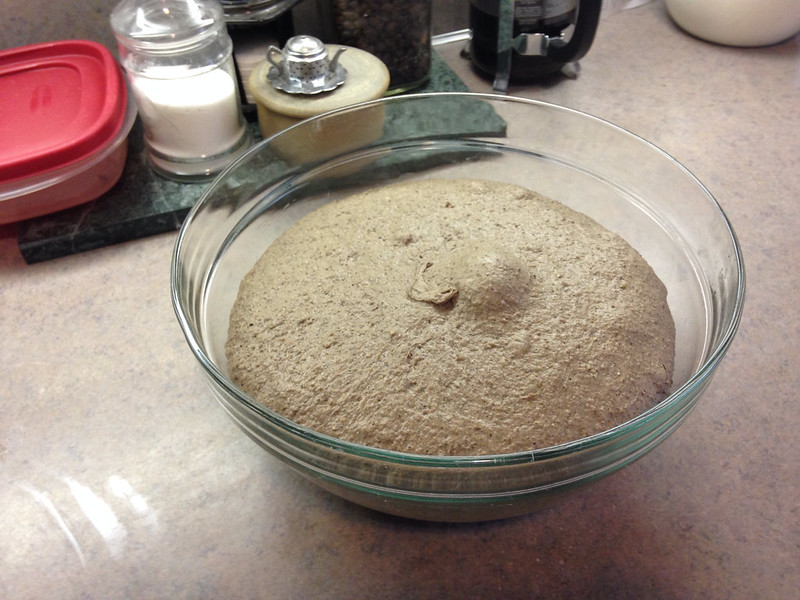 After fermentation, I used a plastic dough scraper to remove the puffy dough mass from the bowl and onto a lightly oiled counter. Then I divided the dough into approximately four equal parts. 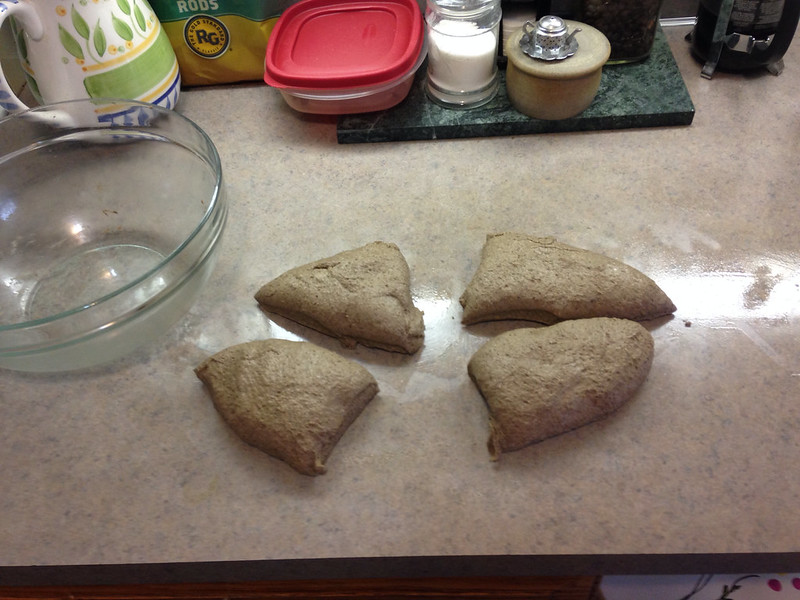 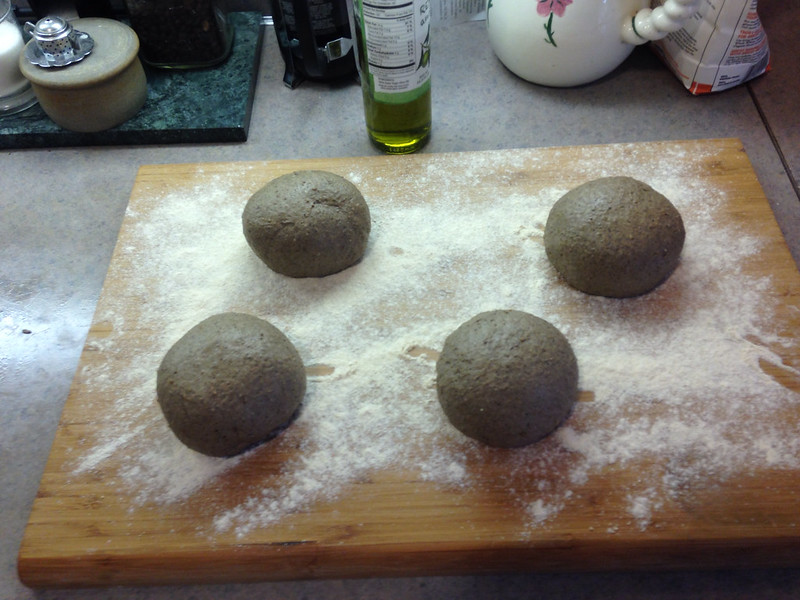 The tops of the dough balls were lightly covered with flour and then covered with plastic and left to proof for at least two hours. 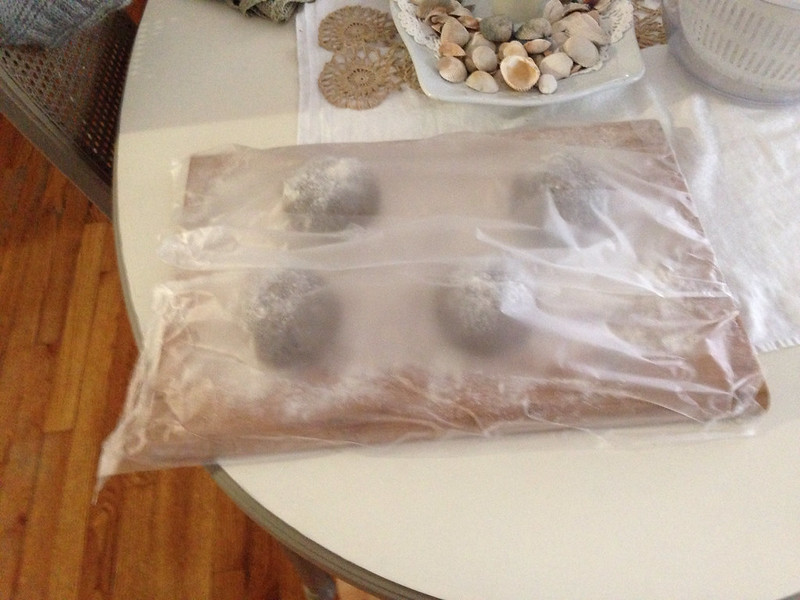 The dough balls proofed surprisingly well. This is what they looked like after two hours of proofing. 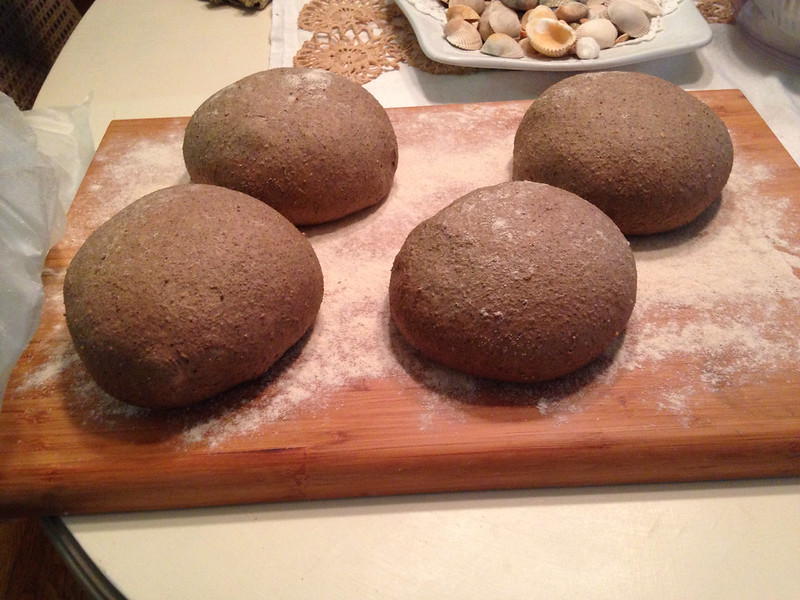 The proofed dough was airy, but the stiff dough was tough to shape into a round. I had to be patient while shaping. It took me a while. I went slow because I did not want to tear the dough. I did tear it a couple times during shaping. If a hole develops, I pinch the dough together to seal the hole, and then let the dough rest for a few moments, and try to be extra careful. Normally for a proofed dough ball of this size, I can stretch the dough to the size of the wooden pizza peel. That did not happen with this dough, but it was big enough. 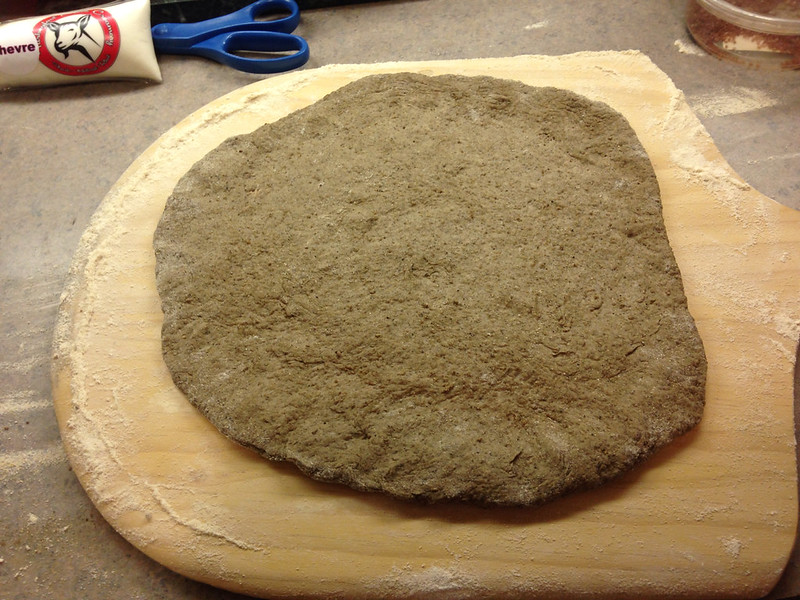 I added the Scarpetti marinara sauce, Turkey Foot Creek plain chevre goat cheese, olive oil, and the coarse red Hawaiian sea salt. Then I slid the dough onto the stone that had warmed in the 500-degree oven for at least 40 minutes. 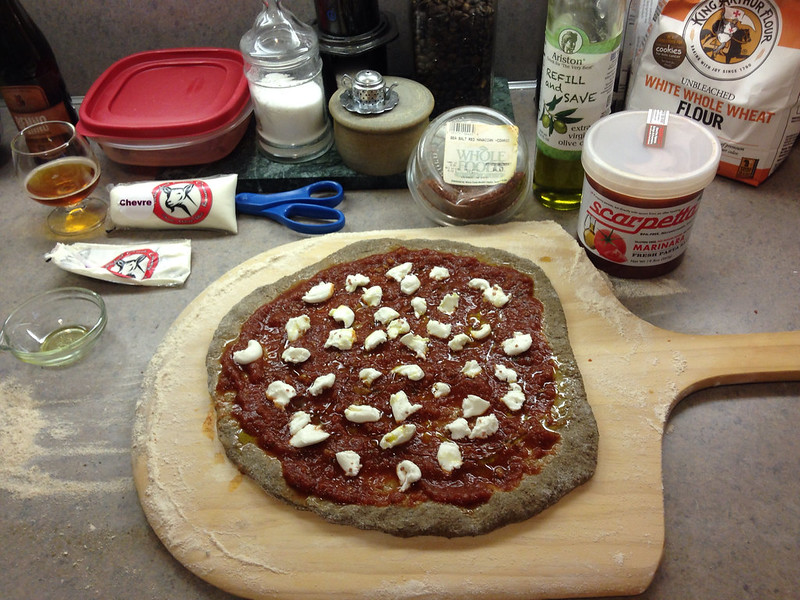 After baking for 9 to 10 minutes, I topped the pizza with fresh basil that I picked from our backyard. We have two potted basil plants growing on a stand near our backdoor. 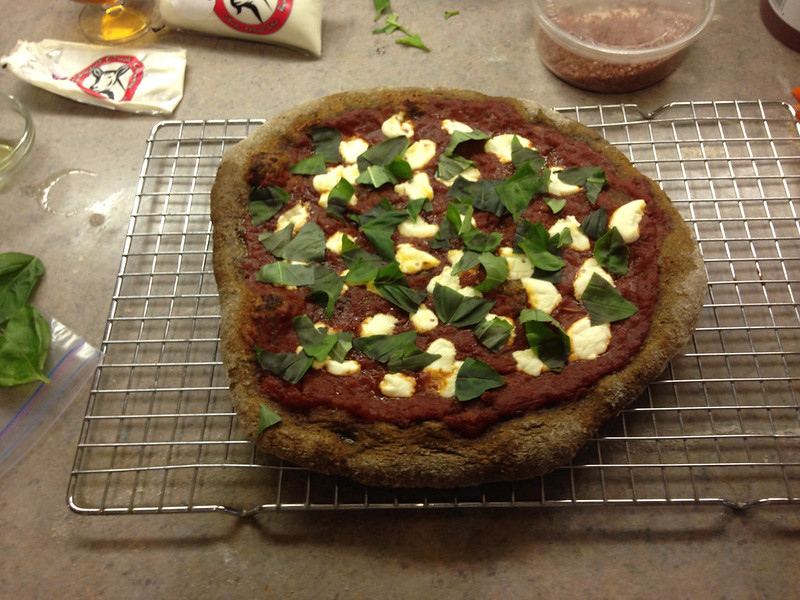 I let the pizza cool for a bit on the cooling rack before cutting. I baked two pizzas. I ate the leftovers the next day. We both enjoyed this pizza a lot. Good use of the spent beer grains. It worked great. 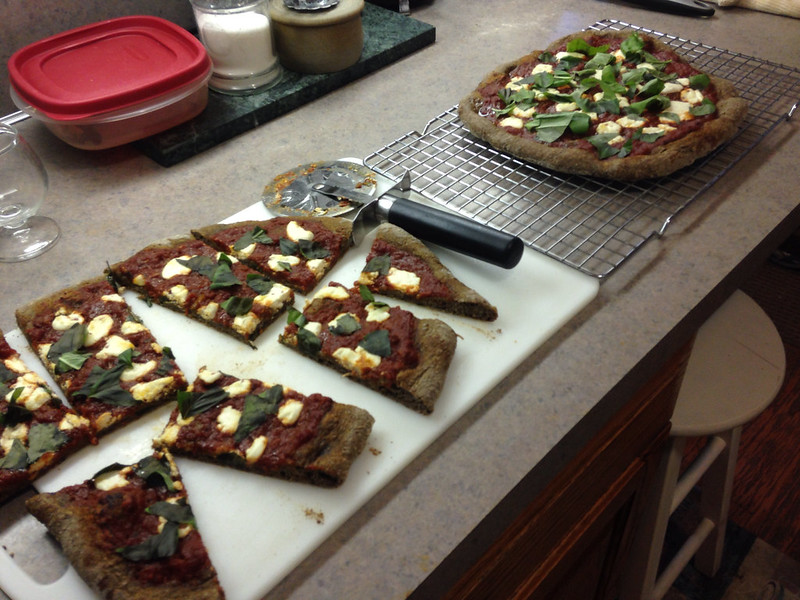 Some of the tools and ingredients used. No white whole wheat flour was used in the recipe. I scattered some of this flour onto the wood peel, so that the dough could slide easily onto the stone. 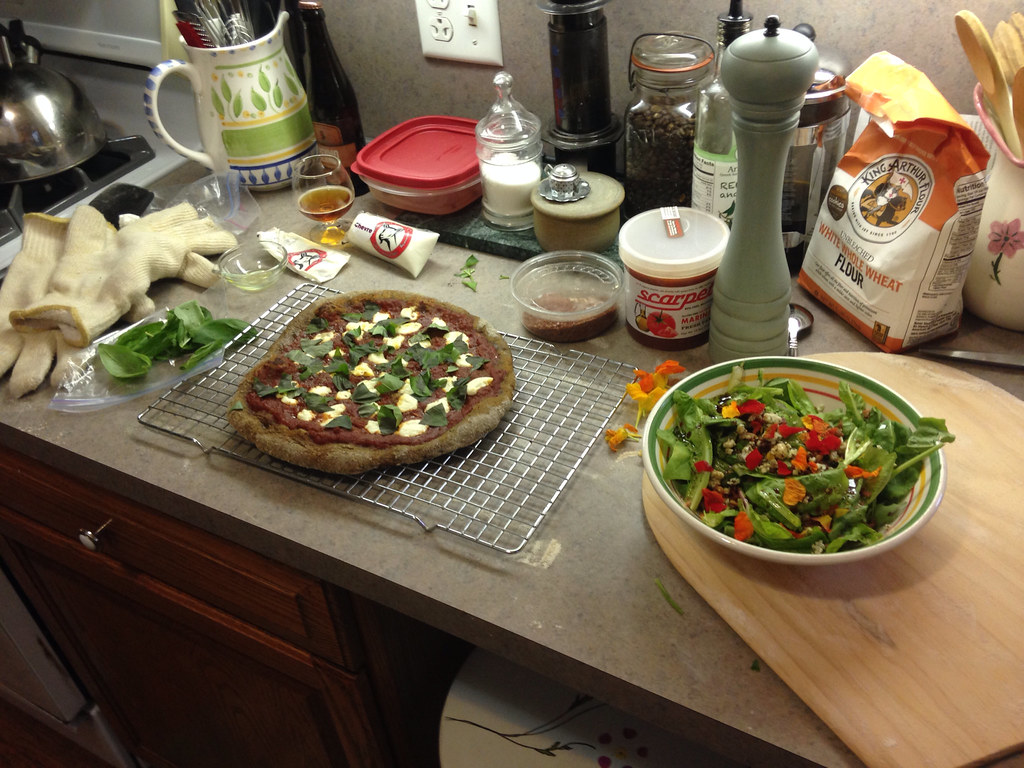 I liked the red Chimay Trappist beer. Reddish-orange color. We didn't have any of our stout beer chilling at the time. The salad was made from greens from our backyard garden and topped with Nasturtium flowers that grow in a pot on the same stand as the basil plants, near our backdoor. It's a good time of the year to be able to use fresh food from our backyard. 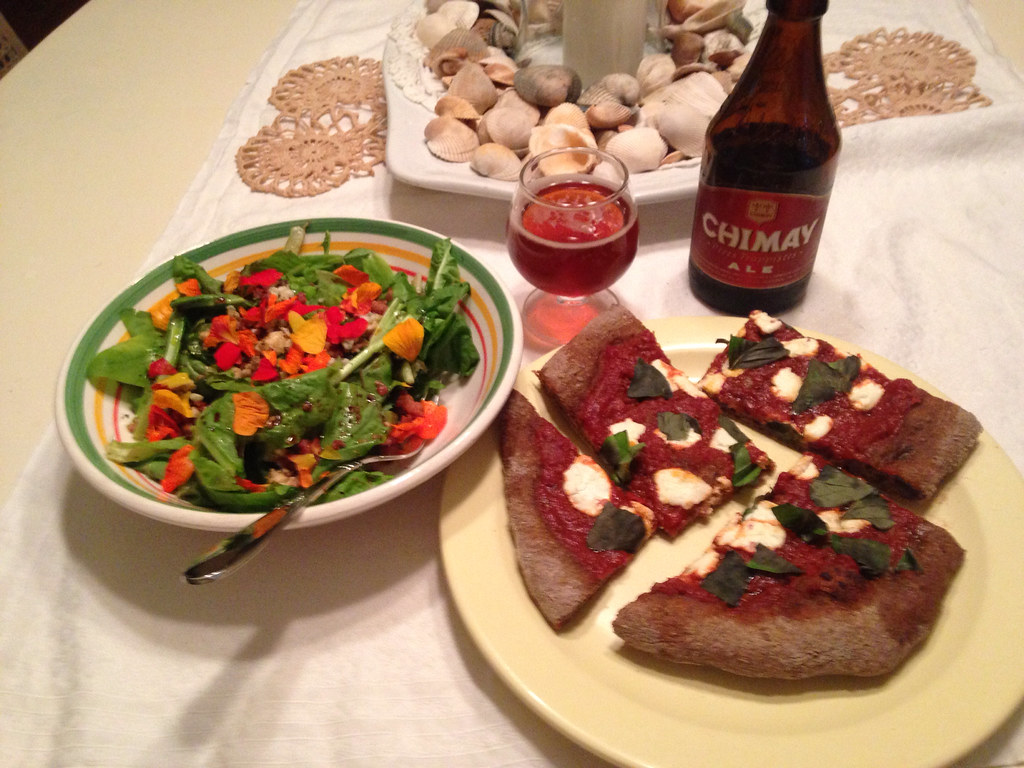