One-gallon batch. All grain. The recipe came from the May-June, 2014 issue of Brew Your Own magazine in an article about the St. Joseph's Abbey brewery, located in Massachusetts, which in December 2013, became the 10th official Trappist brewery in the world.

From the St. Joseph's Abbey website about their glassware:

The Spencer glass was designed, through the collaborative efforts of the monks, Libbey Glass, and other expert consultants, to be the perfect glass for enjoying our Trappist Ale.

From the BYO article:

Trappist beers have long been associated with tradition, excellence, and the monks who brew them in European monasteries. That changed in January [2014] when Spencer Trappist Ale — the first Trappist ale brewed outside of European borders — hit store shelves.

Brewed by the monks of Saint Joseph's Abbey in Spencer, Massachusetts with the blessing of — and assistance from — their European brothers, Spencer Brewery is the 10th Trappist brewery certified by the International Trappist Association (ITA).

We have not tried the real Spencer beer.

We brewed this clone beer on Fri evening, Aug 15, 2014. We ended after Midnight on Sat, Aug 16. It's a very long process for only a one-gallon batch, but it's a test to see if it's worthwhile to brew at a five-gallon batch. We'll know in a month or so.

We did not use the Irish moss.

At 8:12 pm, began mash step for Spencer Trappist Ale Clone per recipe in the May-June 2014 issue of Brew Your Own magazine. Except we're doing one gallon batch.

"The Funeral" by Band of Horses

Done chilling at 12:50 am. Added yeast, agitated, capped, and added blow-off tube. Finished at 1:00 am except for a little cleanup.

Started fermentation in dining room with temps in the mid 70s or warmer. Outdoor afternoon temps the first four days reached 80 to 83 degrees.

Fermentation got very active on Sat, Aug 16, and it quieted down on Sun, Aug 17. Muck blew off through the tube and into the plastic jug.

Every 10 to 15 minutes, we removed the lid from the pot, stirred the mash, and checked the mash temperature. The mash temp should be between 144 and 152 degrees. When the temp got low, we turned the stove burner on for a bit. 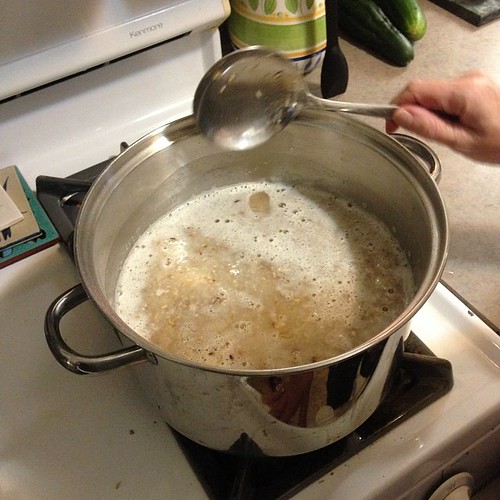 After mash ended, we dumped the grains into a very large mesh screen and collected the initial wort in a bowl. 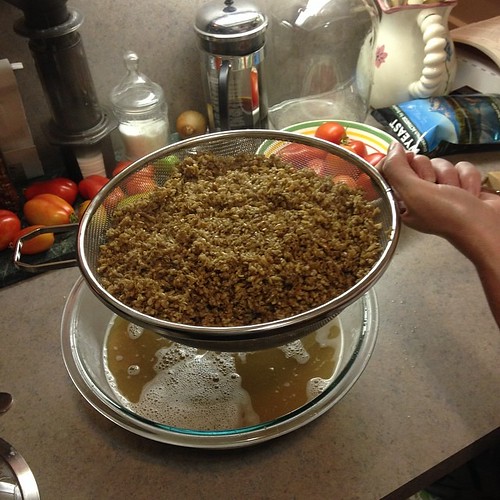 Placed screen back over the now-empty pot and poured the initial wort collected in the bowl back through the grains. 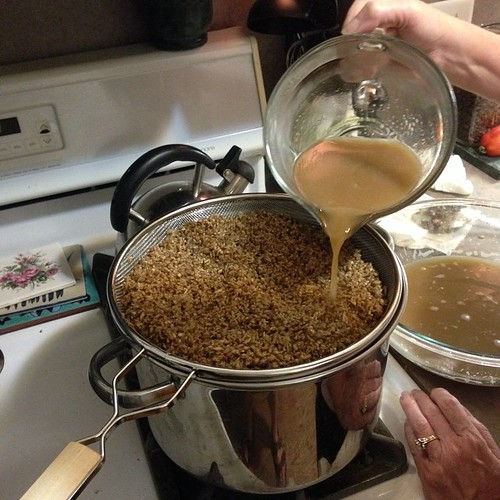 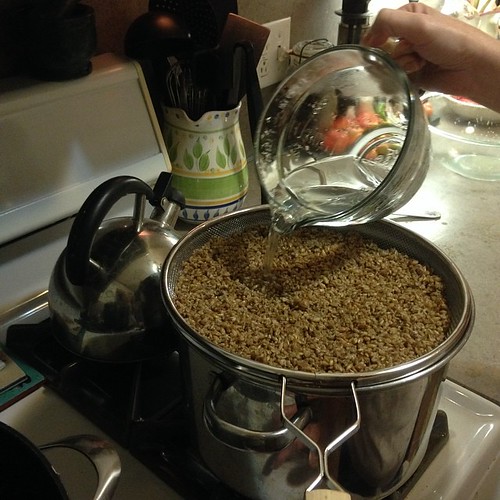 After the sparge, the wort was brought to a rolling boil. Hops were added at different times during the boil. 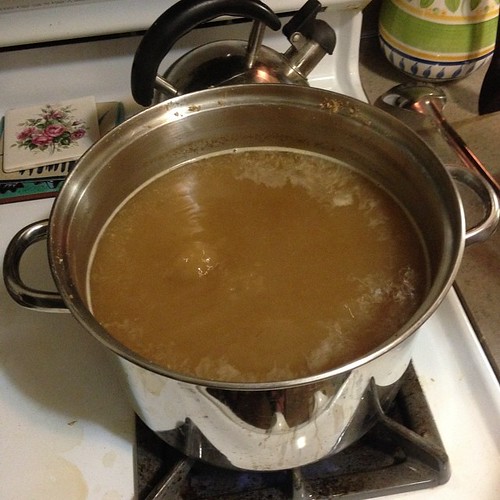 After the boil, we chilled the wort in an ice bath in the sink. 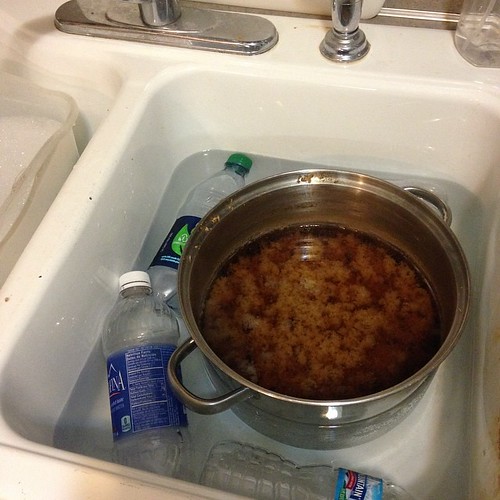 Still chilling the wort. It was interesting how the sediment in the wort changed. 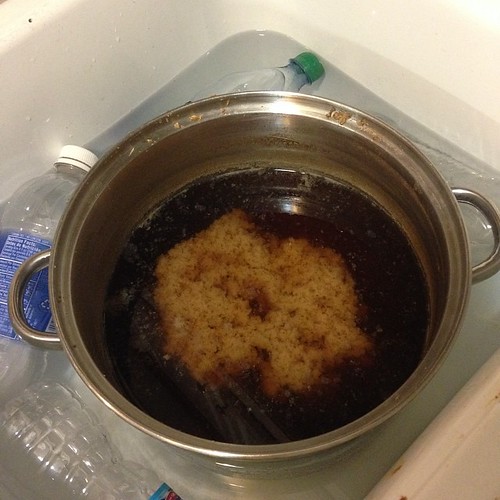 After wort chilled to desired temperature, and the carboy, funnel, etc. were sanitized sufficiently, the wort was poured into the funnel that contained a fine mesh screen that captured the hops sediment. Then the yeast was added to the fermenter, and the fermenter was shaken to agitate the wort with the yeast. 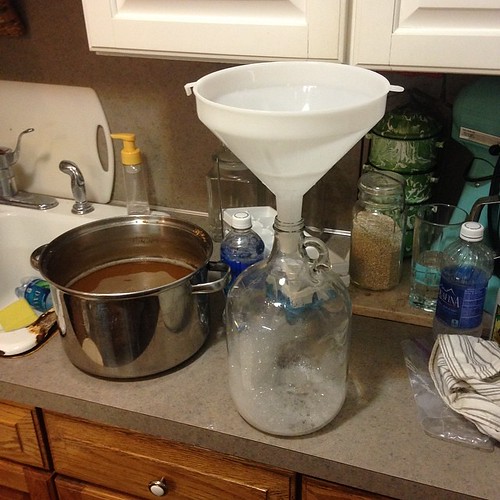 The one-gallon glass fermenter jug was capped with plastic lid with a hole, which allowed the blow-off tube to be applied. The other end of the blow-off tubing was placed into a plastic jug that was filled with santized water. The active fermentation would foam up through the tube and into the jug of water, which prohibited oxygen from entering back through the tube and into the fermenter. Now it was ready to ferment. The Belgian wit resides in a secondary in the background. 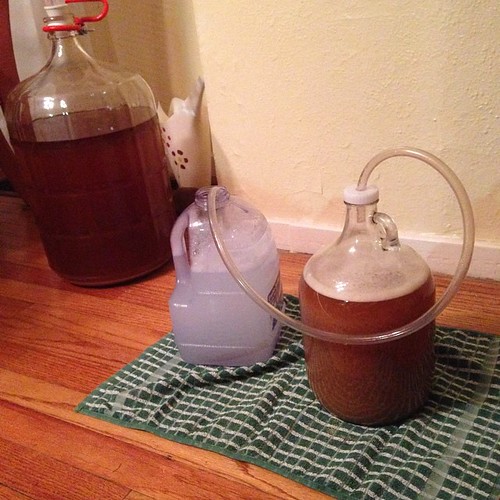 We only bottled seven bottles on Fri, Sep 19, 2014. The trub seemed big, which interfered with siphoning off the beer. We left at least a bottle of beer in the carboy because of too much sediment getting siphoned off. 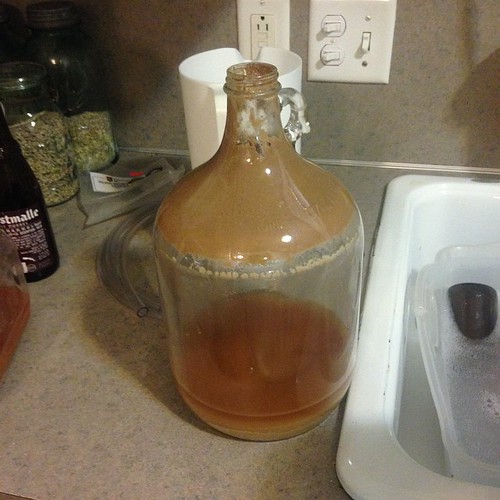 We tasted some of the beer, and I liked this one a lot. For some reason, it seemed to contain apple-like flavors/odors. I'm looking forward to tasting this one in a couple weeks.

I drank my first bottle on Fri, Oct 3, 2014, and I liked this one a lot. It had a nice, fruity aroma, and a hint of apple flavor. It was nicely carbonated.

I think that I prefer the lighter versions of beers, such as the saison, dubbel, and this abbey over the stronger versions like the trippel and quad even though those latter beers are tasty.

Our five-gallon trippel that we also tasted for the first time on Oct 3 is quite good, but I prefer the beers with the ABV in the 5 to 7 percent range. 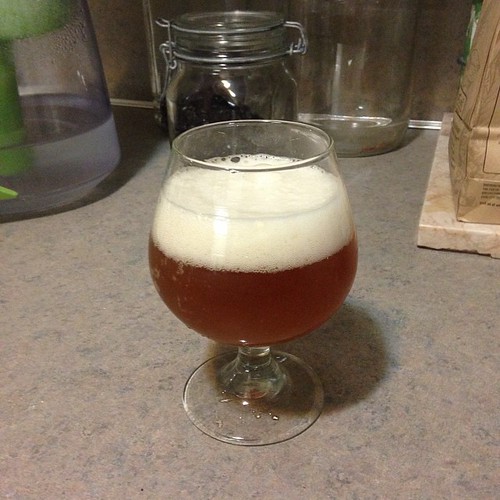 I drank another one while listening to the Browns make a historical comeback against the Titans, and this beer is becoming one of my favorites that we have brewed. I like the apple-like aroma.

The only issue is the length of time that it takes to brew this this beer, at least according to the instructions. 90-minute mash and a 90-minute boil.

The recipe in the magazine also included an extract method, which we may have to try to see if it tastes close to this all-grain recipe.

While we brewed a chocolate maple porter, we drank the final bottle of our Spencer Abbey Trappist clone beer. I was surprised to see that we still had a bottle left. It was tasty to me. Deb said the beer is not one of her favorites, so I drank most of it.

We still have a few tomatoes left from our garden. 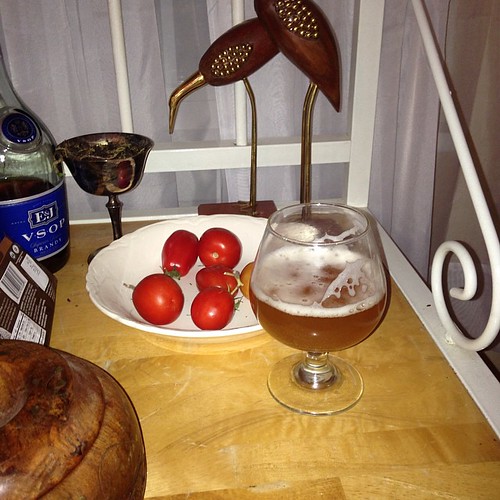